A strange movement has taken place in the OSI 74 lineup. Sources tell us that the classic banned CINEMA INSOMNIA presentation of STARCRASH (1972) has suspiciously appeared out of the darkness and onto OSI 74.

Over 10 years ago, All unsold copies of this classic episode were destroyed due to Cease and Desist from a party of interest looking to sell the DVD rights of an unnamed Italian Sci-Fi film whose reproduction rights were slightly obscure in the first place. The film was already infringing upon the coat tails of STAR WARS – so much so, that Mr. Lobo remembers the film sneaking into town as a kid. One day the poster was just “there”. The producers were really banking on passers by saying “Who’s this guy with a Light Sabre? This Must be the NEW STAR WARS FILM!” 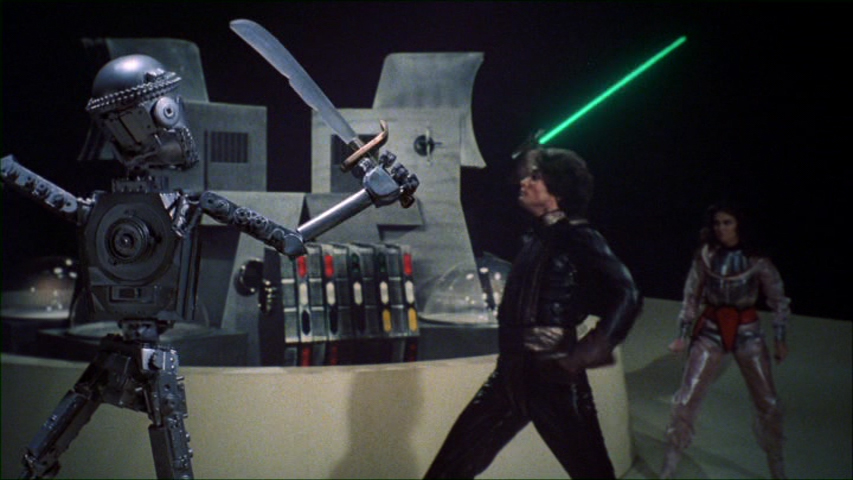 This low budget knock-off was essentially shamed into obscurity but always held a warm place in Mr. Lobo’s tiny cult movie fan heart. Of course, he had a HUGE star crush on CAROLINE MUNRO who played the hero of that film, STELLA STAR. In 2004, Mr. Lobo  discovered that the last copy of “STELLA CRUSH” existed on board Deep Space Super Station One.

According to sources at OSI 74, “before the last copies of the film were destroyed by the combined efforts of the Caroline Munro Fan Club, Christopher Plummer’s estate, and George Lucas’s lawyers, the deep space station recorded the film on magnetic tape. By using one of two Dynabeam receivers (Lobo had one and Europe’s number one film hostess Astra Naughty had the other) Lobo was able to re-broadcast it for his Sleepless Knights to enjoy.

Lobo’s Dynabeam feed is interrupted when a group of Louisiana Klingons attack the station. The stations curator jettisons the tapes before the station is destroyed, but they are now scattered across the galaxy.

Lucky for Mr. Lobo, his European counterpart Astra Naughty has a spaceship. Together with their robot companion Prime 8 played by RO-MAN, the two set out to find the lost tapes. Their quest leads them to the most remote sections of the galaxy including the evil space station of movie tie-in merchandise. In the end Mr. Lobo”s haggling skills fetched the last tape from the hands of a crazed salesman on the Yard Sale Planet. Once again “STELLA CRUSH” was been saved for future generations….to um…enjoy.”

As to why it has appeared on our ROKU channel, Ladiea and Gentlemen, rumors have circulated that the same Russian Cyber-Terrorists from the Red Planet that have been tampering with the numbers of various OSI 74 shows might be trying to get OSI 74 President and our beloved host, MR. LOBO, in trouble again. To make this more strange, the episode appears to be a half hour-longer and contains material that even Mr. Lobo doesn’t remember.

So sit back, relax, gather the family around and indulge in the “most ambitious Cinema Insomnia Episode to date”…..